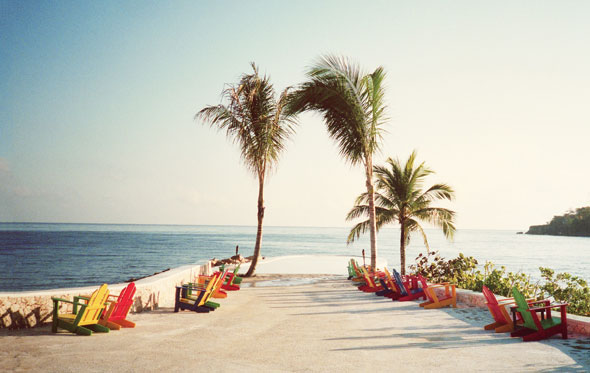 Before being converted for therapeutic use, the two-cottage complex housing GoldenEye’s new Field Spa in Oracabessa, Jamaica, was the sometime home of Naomi Campbell. The lagoon-side lair, built for her by Island Records founder and GoldenEye owner Chris Blackwell (and once featured on MTV Cribs), was reclaimed by the resort during its recent two-year renovation.

The main building houses three treatment rooms, while the octagonal King Room—once Campbell’s bedroom—is perched on higher ground and equipped with an outdoor shower and bath hidden behind a curtain of lush green leaves.

The spa’s signature treatment is a soak with fragrant pimento, ginger, and leaves from the island’s cure-all plant, leaf of life, followed by a hydrating sea kelp and mint body mask.

The soothing aroma of the soak isn’t lost on Blackwell, whose 2,500-acre farm, Pantrepant, supplies the spa with organically grown ingredients: he worked with French fragrance house Robertet to bottle it into an eau de parfum, called Evening at GoldenEye, the first example of Robertet’s Seed to Scent initiative, which focuses attention on a blend’s home territory. As for Campbell, she’s had to find a new place to hang her hat.