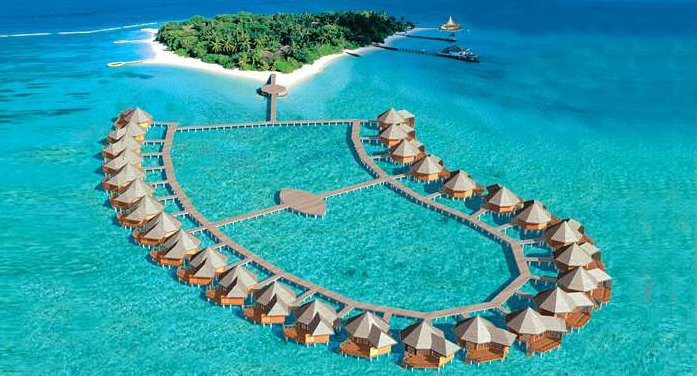 The Republic of the Maldives is a chain of around 1200 islands stretching 750km across the Indian Ocean with the northernmost island at 7° 06″ N and the southernmost island just crossing the Equator at 04° 42″ S.

The exact number of islands varies according to the season and method of classification – islands come and go with the wind, waves and currents!

The tiny islands are geographically grouped into ring shaped reefs called “atolls” and there are 26 of these atoll formations.

An atoll encloses a central lagoon with a flat, sandy bottom at a relatively shallow depth of 40-100m. The outer reef, which forms many of the islands, is often broken by deep channels that allow oceanic water to flow into and out of the central lagoon. Inside the atoll there are numerous smaller ring shaped reefs and tillas.

While there are 26 geographical atolls, tourists are most likely to see just 11 of these as the Maldivian Government has taken steps to restrict the impact of tourism on the local community. Tourists can only be accommodated on registered tourist islands with quite strict regulations governing tourist visits to uninhabited and fishing islands. The tourist development area has been restricted to the seven atolls of North Male, South Male, Ari, Felidhu, Baa, Lhaviyani and Addu Atoll. In 1997 the Government announced the proposed development of 14 new islands opening the atolls of Meemu, Faafu, Dhaalu and Raa to tourism.