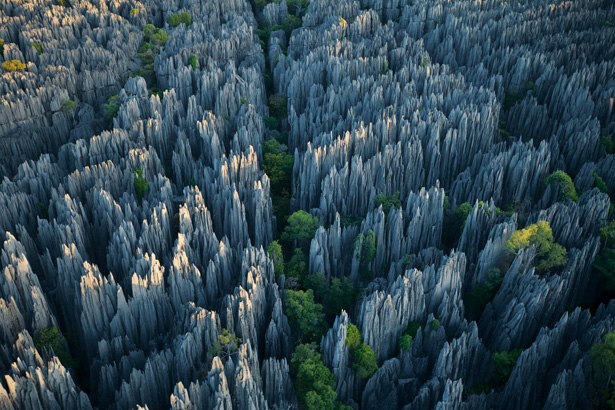 With information technologies & internet developing like anything, many unseen unheard locations are ‘virtually’ getting uncovered. Still the planet Earth encompasses countless hidden gems of locations within its sphere. Whatever may be the advances in technologies, Mother Nature continues to prove that it is the ultimate artist. Time and again Nature amazes us with innumerable varieties of natural phenomena. Such a kind of natural wonder is Tsingy, the limestone forest.

This is not a movie-set or an ancient lost city…. but a spectacular stone forest – a wonderland in the island nation of Madagascar in the African continent.

The Bemaraha National Park, a nature reserve located near the western coast of Madagascar, houses this 700 square meters big region of exceptional topography.

In Malagasy local language, the term ‘Tsingy’ means something that cannot be walked on bare foot, or to be precise, should be walked on tiptoes! Rightly so, as the top of these highland limestone peaks (most of them standing about 70 meters tall) are bare and razor sharp – no room for normal walks… but highly enjoyable for avid adventurers.

Around the world, stone forest is a very rare geographical wonder. Other than Madagascar’s Tsingy, just a few exists such as Russia’s ‘Lena Pillars Nature Park’ and China’s ‘Shilin stone forest’ – both known for their crude beauty. However, Tsingy closely outscores its contemporaries in terms of its vastness and the plentiful tall & slender peaks.