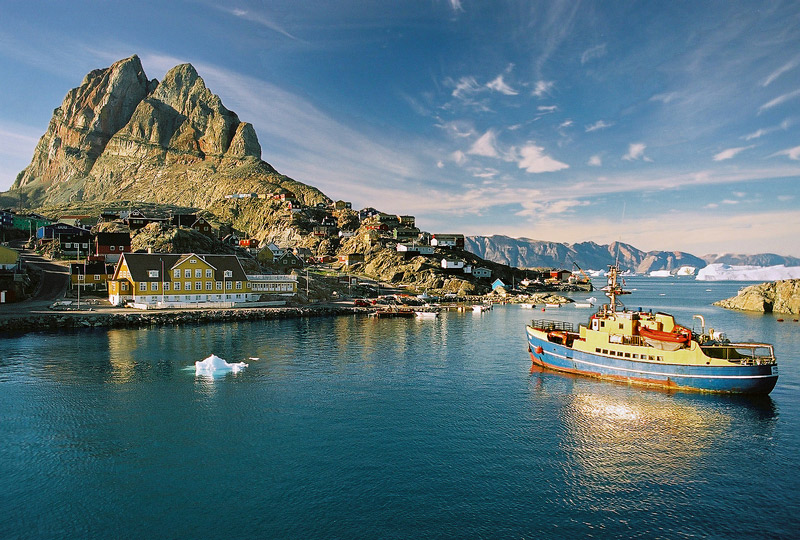 Harbour of Uummannaq seen as the ferry boat is leaving it at the low light of 22:00h on its southbound journey. The village of Uummannaq is built on typical solid granite found all over Greenland. It is very difficult to dig anything, so buildings are constructed on stilts, and all pipes are above ground.

Uummannaq is situated 590 km north of the Polar Circle at 70° 40’N and 58° 08′ W on an island which covers 12 square km, and is dominated by the 1175 m high mountain “Hjertefjeldet”, which means “Heart-shaped Mountain”, after which the city is named. Up where the sun does not set for 2 months every year, but on the other hand does not rise from December to February!

Uummannaq is what you would call the “real” Greenland. A majestic and harsh landscape with tall mountains, rare vegetation, many glaciers and icebergs, and a population to whom fishing and hunting by dog sledge and boat is a natural part of daily life.

The district of Uummannaq has 7 settlements and is a very typical dog sledging district. The 2784 inhabitants live mainly by hunting and fishing. Uummannaq is one of Greenland’s northernmost municipalities. 2,800 people live here. Approx. half of them in one of the 7 settlements.

The town is surrounded by islands and peninsulas, up to 2,000 meters high. The sea around Uummannaq is rich in whales, and impressive icebergs can be seen everywhere, ice mountains in shades of blue and white, with fantastic shapes. They stem from the world’s fastest moving glacier, originating from the inland ice.