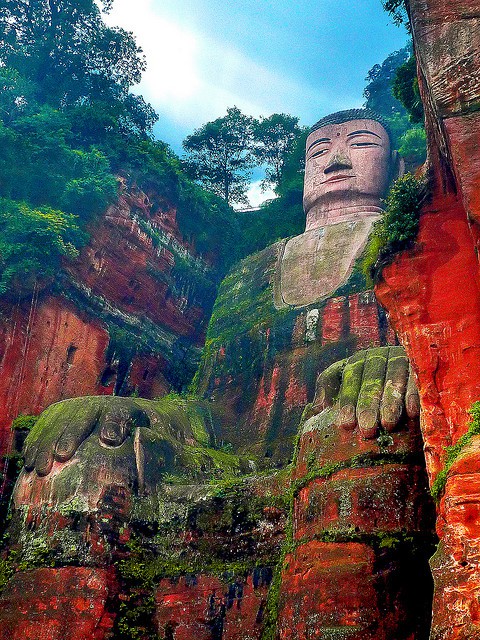 The Giant Buddha of Leshan (aka Dafo) is the tallest stone Buddha statue in the world, carved out of a cliff face by an 8th-century monk in southern Szechuan province. The Giant Buddha overlooks the confluence of the Minjiang, Dadu and Qingyi rivers and faces the sacred Mount Emei (with which it shares its World Heritage status).

Construction on the Giant Buddha began in 713 AD. It was the idea of a Chinese monk named Haitong, who hoped that the Buddha would calm the turbulent waters that plagued the shipping vessels travelling down the river. His plans were not just supernatural – the enormous amount of rubble carved away from the cliff would be deposited in the river, altering the currents and calming the waters.

When government funding for the project was threatened, the monk is said to have gouged out his own eyes to show his piety and sincerity. The construction project was continued by his disciples and finally completed by the local governor in 803.

Today, there are still some strong currents where the three rivers meet – but none that threaten the tourist ferries. The “Mount Emei Scenic Area with Leshan Giant Buddha” was listed as a UNESCO World Heritage Site in 1996.

Known as Dafo, the statue depicts a seated Maitreya Buddha with his hands resting on his knees, gazing across the river with heavy-lidded eyes. Maitreya is the future Buddha, who will appear to preach the dharma when the teachings of Gautama Buddha have faded away. He was especially popular during the 4th to 7th centuries and his images can be found throughout the Buddhist world, conveying his characteristic air of expectancy and promise.

Standing 71 meters (233 feet) tall, Dafo’s shoulders are 28 meters (92 feet) wide and his smallest toenail can accommodate a seated person. Each eyebrow is 18 feet long. According to a local saying, “The mountain is a Buddha and the Buddha is a mountain.”

Several drainage passages hidden in the Buddha’s hair, collar, chest, and holes in the back of his ears preventing the Buddha from serious erosion and weathering. He has been lovingly maintained on a regular basis throughout his 1,200-year history, but is still a bit mossy.

Visitors stare in awe at the Buddha from the tourist ferries and from a terrace next to his ear. On one side of the terrace is a modern statue of the monk Haitong, and behind is the Lingyun Temple Museum with exhibits on the construction and renovations of Dafo.

South of the Giant Buddha is Wuyou Si, which visitors pass on the way from the ferry to the Buddha. A pink-walled monastery founded in 742 AD, it has impressive decorations including splendid gate guardians, painted scenes from the Journey to the West (on the second hall) and amusing sculptures of arhats (inside the Louhan Hall).

On the other side of the gully on Lingyun Shan, there are signs for Han-dynasty tomb chambers, which suggest this site was sacred before the Buddha was carved.