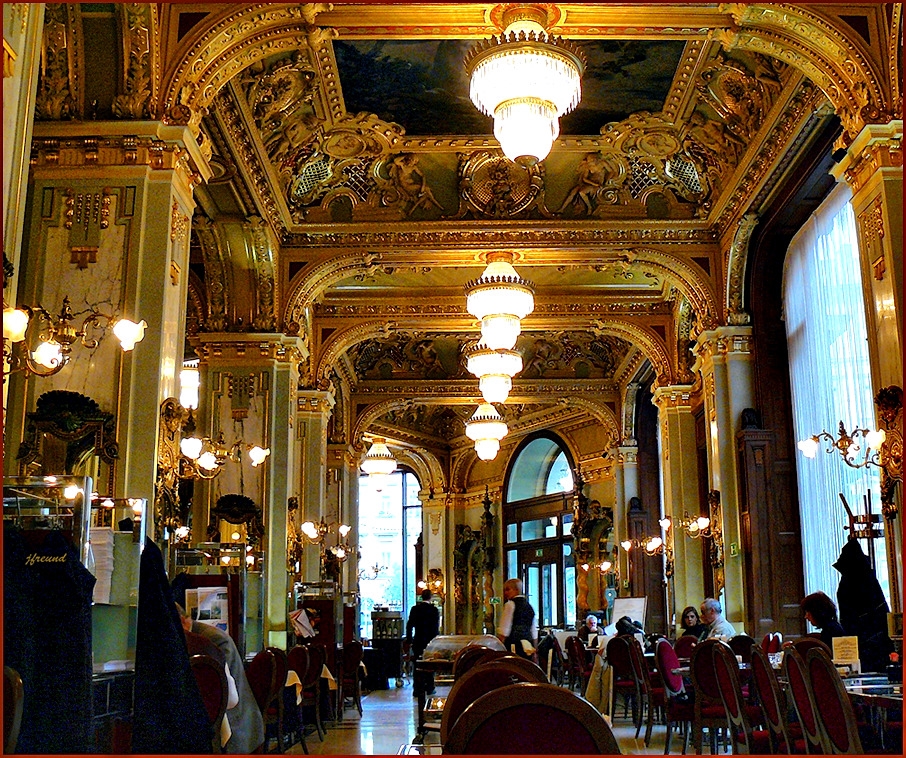 The New York Café has been a Budapest institution since 1895. The elegant turn-of-the-century décor glitters around the literati who still meet here. Everything being made of marble, bronze, silk and velvet many people compare the building to the palace of the Bavarian King Louis II. The ceiling is decorated with the marvellous panel paintings of Gusztáv Mannheimer and Ferenc Eisenhut at the entrance a fountain, in the halls Venetian chandeliers dazzle visitors. In the Café beside the women’s and gambling room in the “deepwater” a billiard-room also found a place.

According to the Pest rumour on the opening day a famous writer Ferenc Molnár together with his journalist friends threw the keys of the Café into the Danube to have it open 24 hours a day.

The Café gained its literary rank when the Harsányi brothers took over management. The New York from the first decade of the twentieth century became renowned as a real literary café one of the centre of the intellectual life of Budapest. Writers and journalists had their Home Circle here and soon the artists’ tables were formed. From the 1910s the cream of the theatrical and movie world swarmed here: Indeed, this is where Sir Alexander Korda – director of films such as The Private Life of Henry VIII & The Thief of Baghdad – started out for his world award winning career, just as Michael Curtis, Oscar winning director of Casablanca did too. Pongrác Kacsó found inspiration in the atmosphere of the Café to compose his famous opera John the Hero as did Imre Kálmán the famous operetta composer when creating several of his celebrated pieces whilst seated in the New York. The New York was a music café: from the beginning gypsy music was to be heard with brass music in wintertime. An abundance of legendary personal waiters took care of the guests, each knowing intimately the regular guests’ wishes and habits.Following research and during the restoration, art monuments not known before were found. As a consequence, the new owners decided to open the Café together with the renewed Palace. From Spring 2006 the New York Café welcomes its guests in all it’s former splendour recalling the milieu of the beginning of the 20th century with an additional more modern design touch.