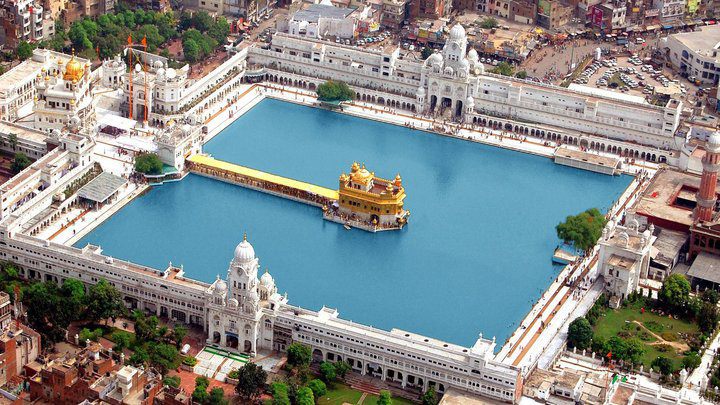 The Harmandir Sahib (Punjabi: ਹਰਿਮੰਦਰ ਸਾਹਿਬ) also Darbar Sahib (Punjabi: ਦਰਬਾਰ ਸਾਹਿਬ, Punjabi pronunciation: [dəɾbɑɾ sɑhɪb]) and informally referred to as the Golden Temple is a prominent Sikh Gurdwara located in the city of Amritsar, Punjab, India. It was built by the fifth Sikh guru, Guru Arjan Dev, in the 16th Century. In 1604, Guru Arjan Dev completed the Adi Granth, the holy scripture of Sikhism, and installed it in the Gurdwara.

There are four doors to get into the Harmandir Sahib, which symbolize the openness of the Sikhs towards all people and religions. The present day Gurdwara was rebuilt in 1764 by Jassa Singh Ahluwalia with the help of other Sikh Misl’s. In the early nineteenth century, Maharaja Ranjit Singh secured the Punjab region from outside attack and covered the upper floors of the Gurdwara with gold, which gives it its distinctive appearance and English name the Golden Temple.