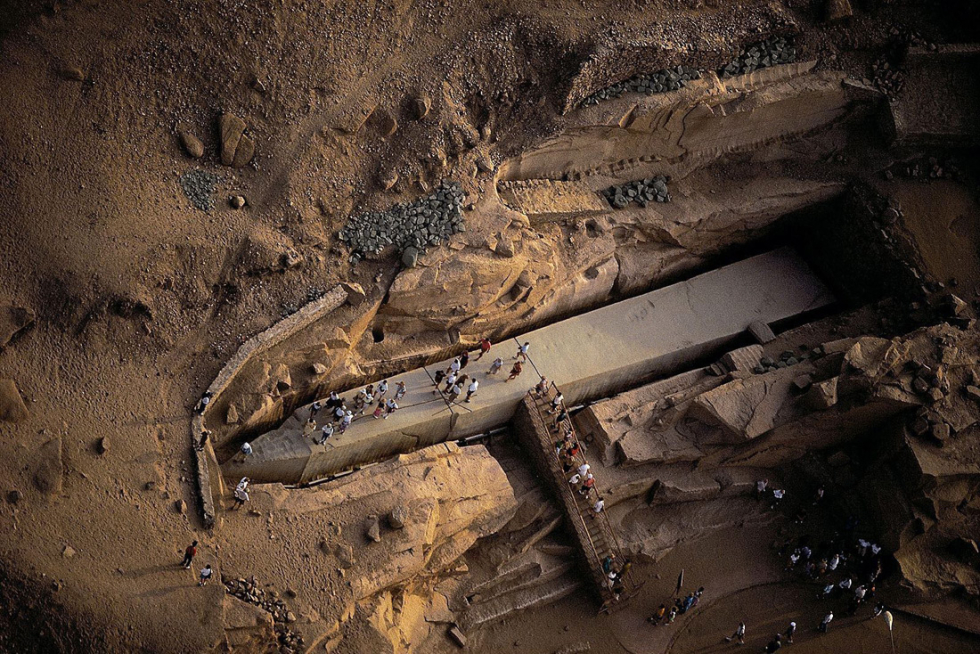 The unfinished obelisk is the largest known ancient obelisk and is located in the northern region of the stone quarries of ancient Egypt in Aswan (Assuan), Egypt. Archaeologists claim the pharaoh known as Hatshepsut sanctioned its construction. It is nearly one third larger than any ancient Egyptian obelisk ever erected. If finished it would have measured around 42 m (approximately 137 feet) and would have weighed nearly 1,200 tons (1,066,621 kilograms).

Archeologists speculate that it was intended to complement the so-called Lateran Obelisk which was originally at Karnak and is now outside the Lateran Palace in Rome. (Thutmose III obelisk in Lateran, Rome: 105 ft) Other archaeologists suggest that the pharaoh Hatshepsut ordered it to be built to celebrate her sixteenth year in power.

The obelisk’s creators began to carve it directly out of bedrock, but cracks appeared in the granite and the project was abandoned. Originally it was thought that the stone had an undetected flaw but it is also possible that the quarrying process allowed the cracking to develop by releasing the stress. The bottom side of the obelisk is still attached to the bedrock. The unfinished obelisk offers unusual insights into ancient Egyptian stone-working techniques, with marks from workers’ tools still clearly visible as well as ocher-colored lines marking where they were working.

Besides the unfinished obelisk, an unfinished partly worked obelisk base was discovered in 2005 at the quarries of Aswan. Also discovered were some rock carvings and remains that may correspond to the site where most of the famous obelisks were worked. All these quarries in Aswan and the unfinished objects are an open air museum and are officially protected by the Egyptian government as an archeological site.