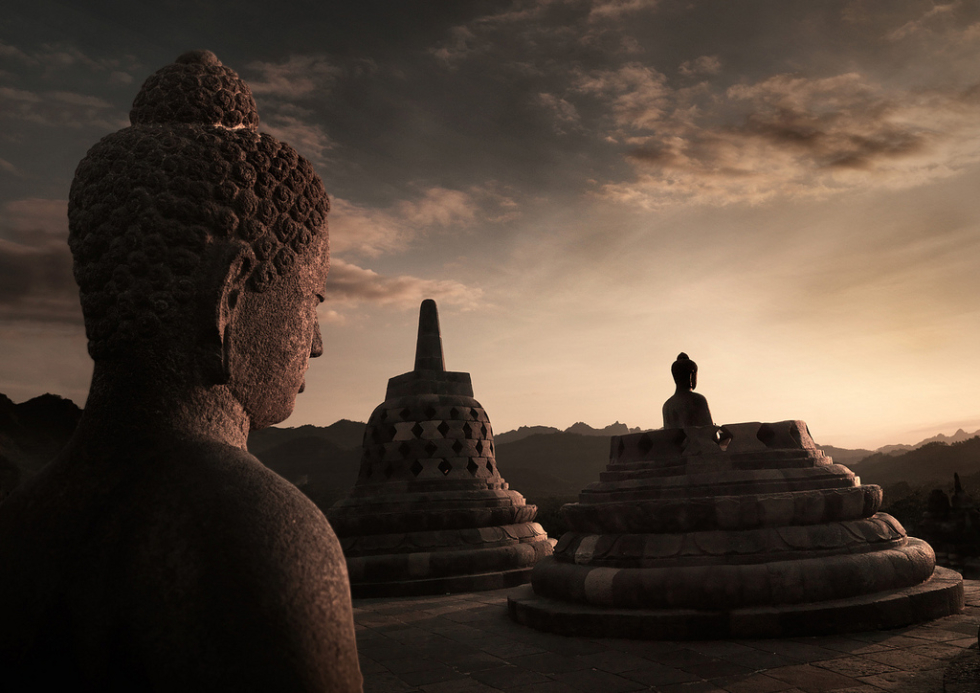 Borobudur, a Buddhist stupa in the Mahayana tradition, is the largest Buddhist monument in the world. Located on the Indonesian island of Java, 40 km (25mi) northwest of Yogyakarta, Borobudur was built around 750 AD. The magnificent temple is a three-dimensional mandala (diagram of the universe) and a visual representation of Buddhist teachings.

There is no written record of who built Borobudur or of its intended purpose. The construction time has been estimated by comparison between carved reliefs on the temple’s hidden foot and the inscriptions commonly used in royal charters during the eight and ninth centuries. Borobudur was likely founded around 750 AD. This corresponds to the peak of the Sailendra dynasty in central Java (760–830 AD), when it was under the influence of the Srivijayan Empire. The construction has been estimated to have taken 75 years and been completed during the reign of Samaratungga in 825.

For centuries, Borobodur lay hidden under layers of volcanic ash. The reasons behind the desertion of this magnificent monument still remain a mystery. Some scholars believe that famine caused by an eruption of Mount Merapi forced the inhabitants of Central Java to leave their lands behind in search of a new place to live. When people once again inhabited this area, the glory of Borobudur was buried by ash from Mount Merapi.

Borobudur was rediscovered in 1814 by Sir Thomas Stamford Raffles who, during his visit in Semarang, received a report indicating the discovery of a hill full of many carved stones. The hill was believed by the local inhabitants to be the site of an ancient monument called budur. Raffles then commissioned a team led by Cornelius to investigate the hill.

It was in 1835 that the site was cleared. Some efforts were made to restore and preserve the colossal monument since then. Unfortunately, in 1896 the Dutch colonial government gave away eight containers of Borobudur stones, including reliefs, statues, stairs and gates, as presents for the King of Siam who was visiting Indonesia.

A restoration program undertaken between 1973 and 1984 returned much of the complex to its former glory, and the site has since become a destination of Buddhist pilgrimage. On January 21, 1985 the temple suffered minor damage due to a bomb attack. In 1991, Borobudur was listed by UNESCO as a World Heritage Site.