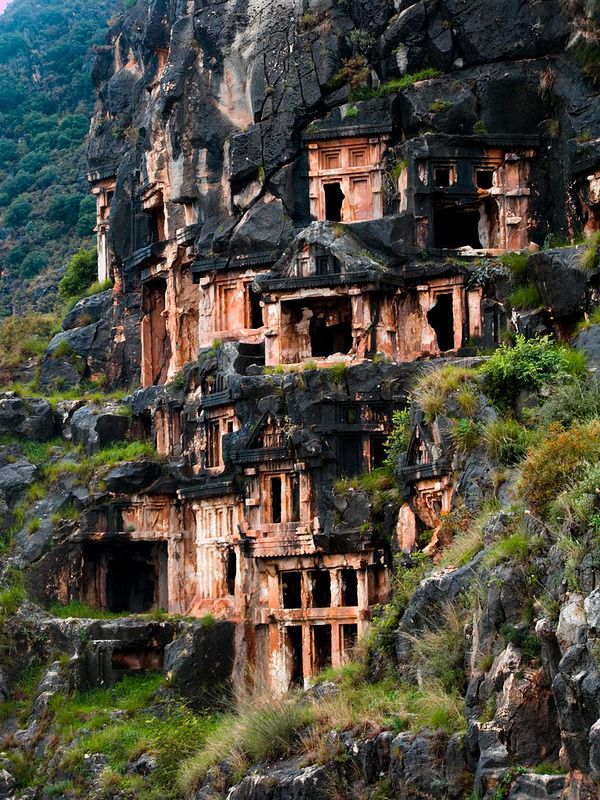 Myra Necropolis, Turkey. A Lycian city of the dead carved into the hillside of Southern Turkey, complete with startlingly human touches.

Though archaeologists rank the exquisite necropolises at Myra as classics of Lycian culture, the site’s most beautiful elements are some of its touching, humanizing details.

Dating back to the 4th century BCE, the rock-cut tombs line the hills above Myra’s famed theater and the Church of St. Nicholas. These houses of the dead are divided into two main necropolises comprised of a mixture of house- and temple-style tombs: the ocean necropolis and the river necropolis. Colorful as they seem now, most have faded greatly over the years after having been painted brilliant shades of red, yellow, blue, and purple in their prime.

The most famous example of this was documented by early explorer Charles Fellows during his visit in 1840. Named after the lion and bull adorning its facade, the “Lion Tomb” also contains 11 life-sized stone figures thought to represent the grave owner’s family. A number of inscriptions in ancient Greek and Lycian appear carved throughout, including one that sounds as if it could’ve been written just yesterday: Moschos loves Philiste, the daughter of Demetrios.

Once exclusively the provenance of the upper and middle classes, the presence of Myra’s remarkable necropolises signal the residents’ former prosperity in addition to an ongoing sense of security that translated from this world into the next.