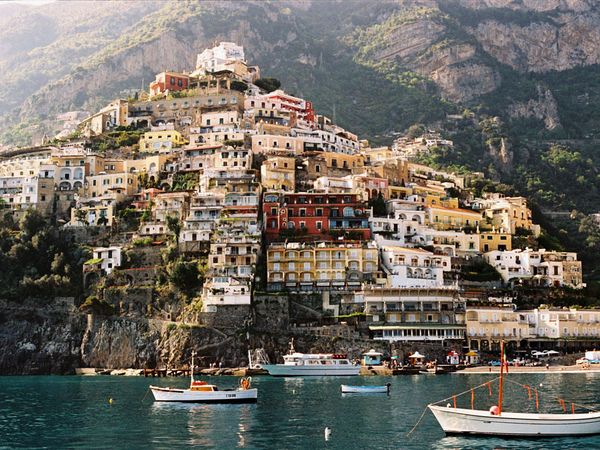 Colorful homes cling to the cliffside in Positano, a town along Italy’s Amalfi Coast.

This quintessentially Mediterranean landscape blends centuries of artistic and architectural accomplishments with one of nature’s perfect panoramas.

Italy’s Amalfi Coast boasts a classic Mediterranean landscape, a sensual blend of both natural and cultural wonders. The breathtaking terrain includes dramatic coastline topography scattered with terraced vineyards, orchards, and pastures—often with enchanting views of the vibrant waters below.

Kind climate, abundant resources, and natural beauty have drawn people to this coast for many centuries, and the Greeks, Romans, Normans, Saracens, Arab-Sicilians, and many others have left their mark. Amalfi communities often cluster along cliffs, their terraces blending into the rock to add their own picturesque charm to the natural beauty of the coast. Upon closer inspection, towns like Amalfi and Ravello are home to many examples of artistic and architectural excellence—not a surprise, since this stretch of the Sorrento Peninsula has long attracted famous artists of all stripes.

Amalfi itself thrives as a picturesque tourist center but in the 11th and 12th centuries the city centered the Amalfi Maritime Republic and was a naval power to be reckoned with throughout the Mediterranean. Amalfi’s ports also saw extensive trade with North Africa, and the city retains cloisters of Arab-Sicilian architecture throughout, as well as the Arsenale—a partially preserved medieval shipyard from a glorious era.

In Paestum, columned temples to Poseidon, Hera, and Athena stand in what was, from the seventh century B.C., the Greek city of Poseidonia. These breathtaking structures are among the best preserved of their kind to be found anywhere in the world.

Until the 1800s the coast’s steep terrain meant that overland access to the region was possible only by mule. While many oases of quiet can still be found here, particularly away from tourist centers, the Amalfi Coast has changed irreversibly since then. But echoes of far more distant eras remain, including ancient cathedrals, gardens, and Roman villas like Anacapri’s Villa di Damecuta, possibly built by Tiberius.

One of the most enjoyable things to do on the Amalfi Coast is to simply find a spot where you can soak it all in. Among the top locations is Monte Solaro, a B&B in Anacapri with stunning views of the twin bays Salerno and Naples.

How to Get There: Trains connect Naples with Sorrento and Salerno. Boats also run to many Amalfi Coast towns during the warmer months.

When to Visit: Consider visiting in the spring (May) or fall (September-October), when the crowds drawn to this world-renowned beauty spot are at their lowest.